Siegfried Wagner was born on June 6, 1869 as the son of Richard Wagner and Cosima von Bülow in Tribschen. What talents did the Wagner son have and what constraints accompanied his life? The exhibition focuses on his artistic abilities, as well as the family rules that forced him to keep his homosexuality a secret and to start a family in order to secure the Wagner dynasty.

An exhibition of "artes Projekte" with Dr. Verena Naegele and Sibylle Ehrismann. 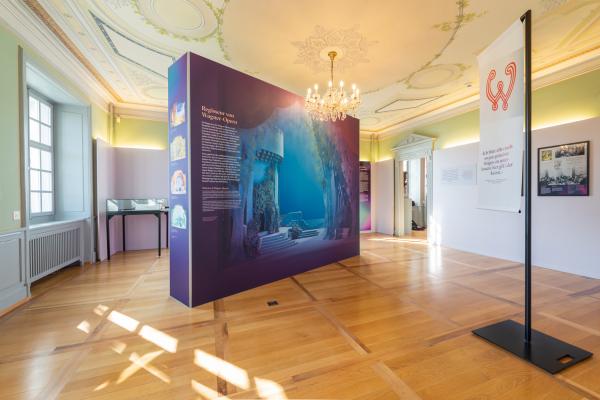 This small exhibition is part of the Lucerne Comix Festival Fumetto. 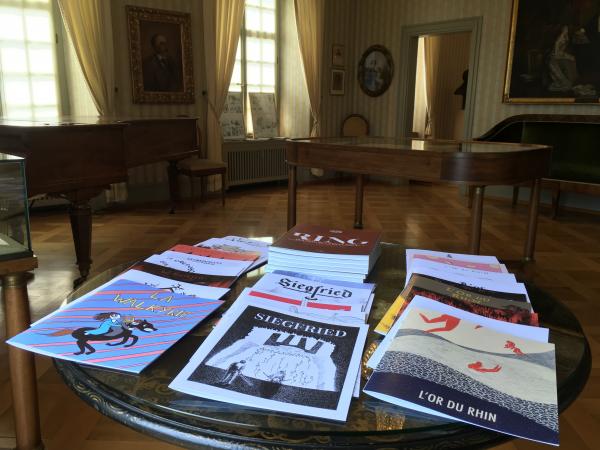 The special exhibition tells the eccentric life of Richard Wagner in comic format. The dissolute and sometimes quite dramatic life of Wagner is skillfully retold in 40 pages. The graphic novel "Wagner", carefully researched by the author Andreas Völliger, with the fascinating illustrations by Flavia Scuderi, provides an exciting insight into the 19th century and has been awarded several prizes. 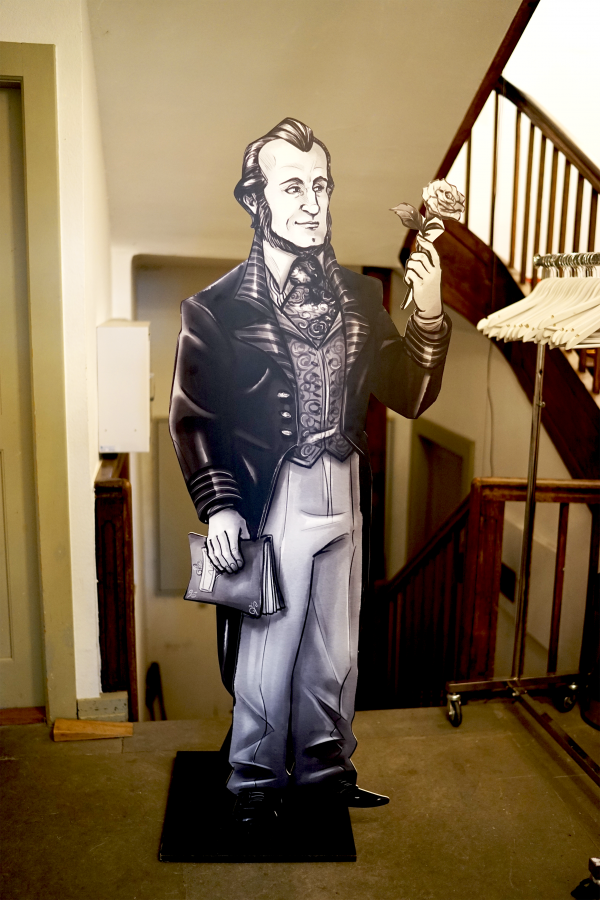 The focus of this special exhibition is Franz Wilhelm Beidler (1901-1981). He was Richard Wagner's first grandson. As the secretary of Leo Kestenberg, the influential music consultant of the Weimar Republic, he experienced the musical avant-garde first hand in Berlin before he had to leave Germany because of Hitler's seizure of power. Between 1943 and 1971 he shaped the federal literary scene as secretary of the Swiss Writers' Association. He was a proven expert on Richard Wagner's work and interfered in the debates about the Bayreuth Festival. Since his mother Isolde was not recognized as Wagner's daughter, Franz Wilhelm Beidler always remained an outsider in Bayreuth. The exhibition reveals new facts about Isolde's "paternity process" and Wagner's Swiss branch.

An exhibition of "artes Projekte" with Dr. Verena Naegele and Sibylle Ehrismann.

In this special exhibition, the contemporary Viennese artist Christoph Kiefhaber presents paintings and graphics on the subject of the Nibelungen saga: hatred, greed for power and betrayal stand against love, willingness to make sacrifices and heroic deeds. Topics that have always preoccupied mankind. The Edda songs and the Nibelungen saga were written as early as the early Middle Ages. Richard Wagner used these original texts to write down his epic "The Ring of the Nibelung" and processed a highly complex narrative into a 16-hour musical drama. Christoph Kiefhaber chooses painting for his Ringer story. 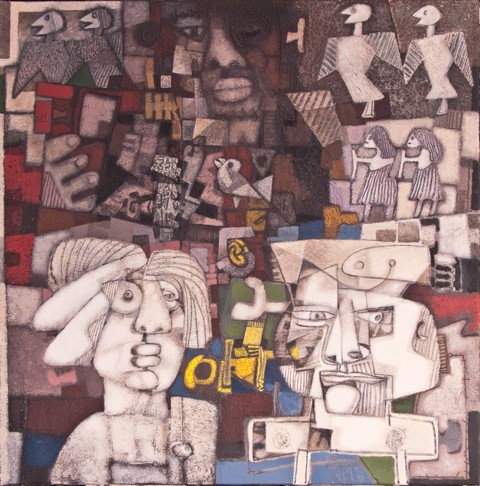 The special exhibition "Visiting Richard Wagner" is to be understood as an invitation to go on a journey of discovery and to experience the house in which the composer lived with his family. "The exhibition works with the curiosity of the visitors," explains Susann Buchholz, who is responsible for the design concept. 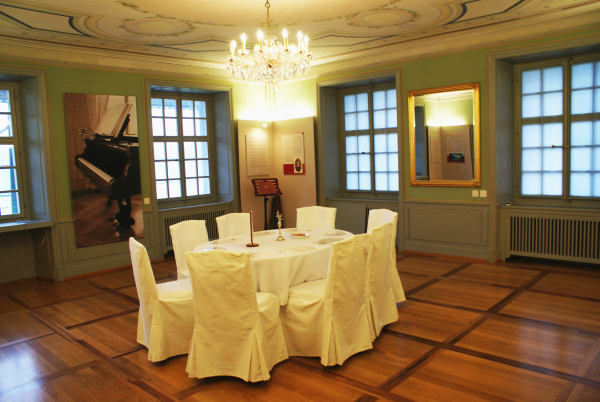 Hikes of Richard Wagner
"Alpine myth in the 19th century"

The special exhibition is dedicated to the question of how Switzerland became a land of discovery for adventurers, wealthy people and artists from all over Europe; for people like composer and revolutionary Richard Wagner. People like him have reproduced and recorded their experiences in their personal reports, paintings, musical compositions and literary works. With their diverse credentials, they made a lasting contribution to the development of tourism in Switzerland - and in Lucerne in particular. The exhibition shows what adventurous mountain tours were about in the pioneering days of Swiss alpinism. They often took place with inadequate equipment, mostly on foot or with horses on unmarked paths. 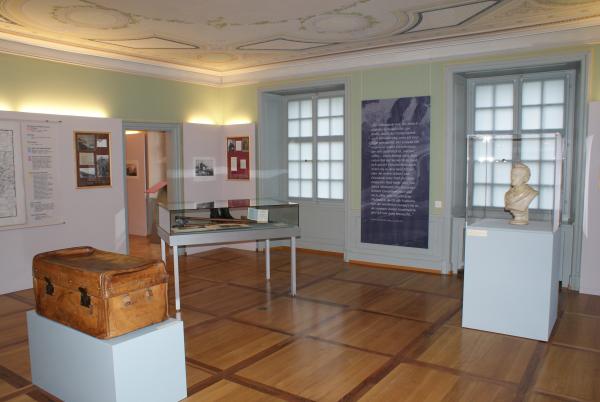 History of the museum
Lucerne Festival and Friedelind Wagner

The special exhibition focuses on three anniversary events and thus not only provides an insight into Richard Wagner's life, but also into the history of the museum. Today's Richard Wagner Museum opened on July 1, 1933, so the exhibition can look back on 75 years of events and encounters. It was the 70th anniversary of the opening concert of the Lucerne Festival on August 25, 1938. The exhibition also focuses on the granddaughter Friedelind Wagner, who would have celebrated her 90th birthday. She spent her final years in Lucerne until her death on May 8, 1991. 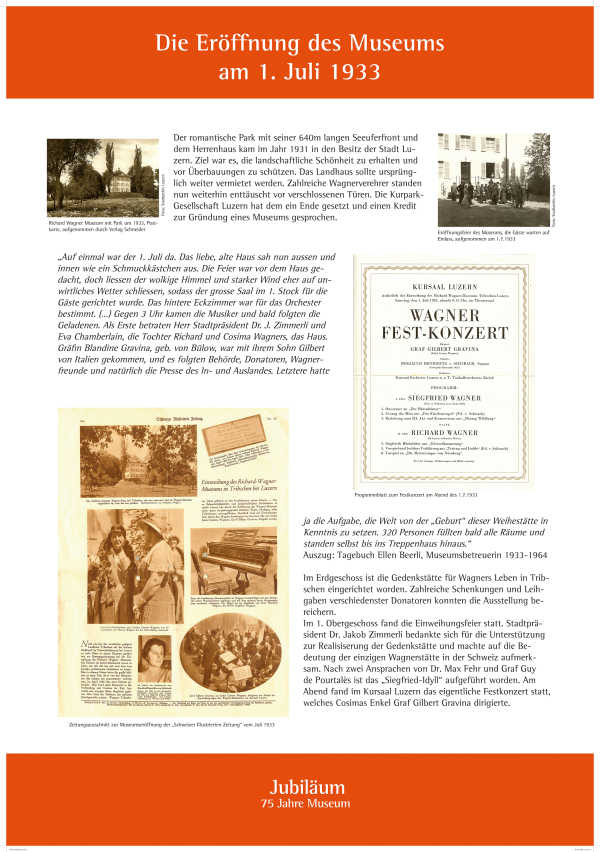 "Vreneli" is a special exhibition about Richard Wagner's service employee Verena Weidmann (1832-1906). She met Wagner during his stay in the Dépendence des Schweizerhof in Lucerne. The hotel employee, whose wellbeing service Wagner had come to appreciate, was henceforth committed as his loyal companion and always traveled with Wagner. 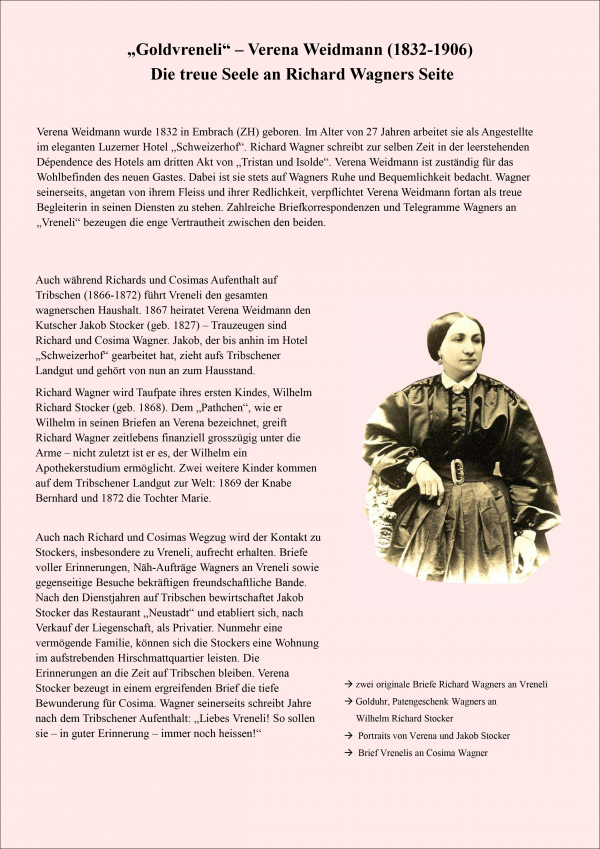